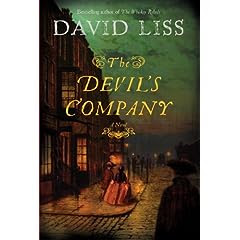 
From the acclaimed author of The Whiskey Rebels and A Conspiracy of Paper comes, The Devil's Company, a superb new historical thriller set in the splendor and squalor of eighteenth-century London. In Benjamin Weaver, David Liss has created one of fiction’s most enthralling characters.

The year is 1722. Ruffian for hire, ex-boxer, and master of disguise, Weaver finds himself caught in a deadly game of cat and mouse, pitted against Jerome Cobb, a wealthy and mysterious schemer who needs Weaver’s strength and guile for his own treacherous plans.

Weaver is blackmailed into stealing documents from England’s most heavily guarded estate, the headquarters of the ruthless British East India Company, but the theft of corporate secrets is only the first move in a daring conspiracy within the eighteenth century’s most powerful corporation. To save his friends and family from Cobb’s reach, Weaver must infiltrate the Company, navigate its warring factions, and uncover a secret plot of corporate rivals, foreign spies, and government operatives. With millions of pounds and the security of the nation at stake, Weaver will find himself in a labyrinth of hidden agendas, daring enemies, and unexpected allies.

With the explosive action and scrupulous period research that are David Liss’s trademarks, The Devil's Company, depicting the birth of the modern corporation, is the most impressive achievement yet from an author who continues to set ever higher standards for historical suspense.
About the Author

David Liss is the author of five novels, with more on the way.

His debut novel, A Conspiracy of Paper (2000) with its hero, the pugilist turned private investigator Benjamin Weaver, was named a New York Times Notable Book and won him the 2001 Barry, MacAvity and Edgar awards for Best First Novel.

David's second novel, The Coffee Trader (2003) was also named a New York Times Notable Book and was selected by the New York Public Library as one of the year's 25 Books to Remember.

His third novel A Spectacle of Corruption (2004) the sequel to A Conspiracy of Paper, became a national bestseller. David's fourth novel, The Ethical Assassin (2006) is his first full-length work that is not historical fiction.

David's most recent novel, The Whiskey Rebels, is set in 1790's Philadelphia and New York. The third Benjamin Weaver novel, The Devil's Company, will be in stores in late 2009.

Born in New Jersey and raised in Florida, David is, in fact, a one-time encylopedia salesman. He received his B.A. from Syracuse University, an M.A. from Georgia State Universty and his M.Phil from Columbia University, where he left his dissertation unfinished to pursue his writing career.

David lives in San Antonio with his wife and children. You can visit his website at www.DavidLiss.com.
Book Excerpt:


In my youth i suffered from too close a proximity to gaming tables of all descriptions, and I watched in horror as Lady Fortune delivered money, sometimes not precisely my own, into another’s hands. As a man of more seasoned years, one poised to enter his third decade of life, I knew far better than to let myself loose among such dangerous tools as dice and cards, engines of mischief good for nothing but giving a man false hope before dashing his dreams. However, I found it no difficult thing to make an exception on those rare occasions when it was another man’s silver that filled my purse. And if that other man had engaged in machination that would guarantee that the dice should roll or the cards turn in my favor, so much the better. Those of overly scrupulous morals might suggest that to alter the odds in one’s favor so illicitly is the lowest depth to which a soul can sink. Better a sneak thief, a murderer, even a traitor to his country, these men will argue, than a cheat at the gaming table. Perhaps it is so, but I was a cheat in the service of a generous patron, and that, to my mind, quieted the echoes of doubt.

I begin this tale in November of 1722, some eight months after the events of the general election of which I have previously written. The rancid waters of politics had washed over London, and indeed the nation, earlier that year, but once more the tide had receded, leaving us none the cleaner. In the spring, men had fought like gladiators in the service of this candidate or that party, but in the autumn matters sat as though nothing of moment had transpired, and the connivances of Parliament and Whitehall galloped along as had ever been their custom. The kingdom would not face another general election for seven years, and in retrospect people could not quite recollect what had engendered the fuss of the last.

I had suffered many injuries in the events of the political turmoil, but my reputation as a thieftaker had ultimately enjoyed some benefits. I received no little notoriety in the newspapers, and though much of what the Grub Street hacks had to say of me was utterly scurrilous, my name had emerged somehow augmented, and since that time I had suffered no shortage of knocks upon my door. There were certainly those who might now stay away, fearing that my exploits had an unpleasant habit of attracting attention, but many more gazed with favor upon the idea of hiring a man such as myself, one who had fought pitched battles as a pugilist, escaped from Newgate Prison, and shown his mettle in resisting the mightiest political powers in the kingdom. A fellow who can do such things, these men reasoned, can certainly find that scoundrel who owes thirty pounds; he can find the name of the villain who plots to run off with a high-spirited daughter; he can bring to justice the rascal who stole a watch.

Such was the beer and meat of my trade, but, too, there were those who made more uncommon uses of my talents, which was why I found myself that November night in Kingsley’s Coffeehouse, once a place of little reputation but now something far more vivacious...
Readers, your thoughts / comments are most welcome.

Popular posts from this blog

August 04, 2011
To say that the beautiful and tempestuous Lady Serena is highly upset to find that her recently deceased (and highly eccentric) father, the Earl of Spenborough, left the care of her fortune and control over her marriage to her jilted fiancé Ivo Barrasford, the Marquis of Rotherham, is to understate the case. Too much time has elapsed since Serena broke her engagement to her childhood companion, Rotherham, (and that too after the invitations had been sent - such a scandal!) for them to feel anything but discomfort at this bit of posthumous matchmaking on the part of the Earl. Or so they both declare.

Used to commanding a large household and having acted as her father's hostess from a young age, energetic and politically-savvy Serena soon finds herself in doldrums when her life is suddenly reduced to a small Dower house with none but her father's young widow, Fanny, for company and a social sphere consisting of occasional visits from neighbors who'd been just casual acquain…
Post a Comment
Read more

September 14, 2011
I'm happy to welcome Gabrielle Bernstein who's once again stopping by here with a guest blog post.

Her second book Spirit Junkie: A Radical Road to Self-Love and Miracles was published by Random House September 12. It’s part memoir and part road map: Gabby shares her journey toward becoming the full-on, inspirational Spirit Junkie that she is today, and she teaches her readers every lesson she learned along the way.

February 12, 2010
Still haunted by the death of her only brother, James, in the Great War, Evelyn Gifford is completely unprepared when a young nurse and her six-year-old son appear on the Giffords' doorstep one night. The child, the nurse claims, is James', conceived in a battlefield hospital. The grief-stricken Giffords take them both in; but Evelyn, a struggling attorney, must now support her entire family-at a time when work for women lawyers is almost nonexistent.

Suddenly a new case falls in Evelyn's lap: Seemingly hopeless, it's been abandoned by her male coworkers. The accused-a veteran charged with murdering his young wife- is almost certain to die on the gallows. And yet, Evelyn believes he is truly innocent, just as she suspects there may be more to the story of her "nephew" than meets the eye.

My thoughts -The Crimson Rooms is an exciting and thought provoking story of a woman struggling to change both herself and society, and all the while attempt to …
1 comment
Read more